Artworks start to be installed at Ironworks 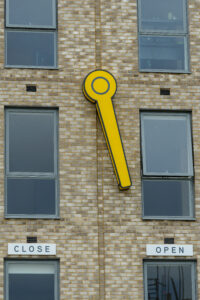 The first four specially commissioned artworks by artist Tom Pearman have been installed at Ironworks and we’re excited to share some photos of these with you.

Tom’s work has taken inspiration from residential, commercial and industrial switches as part of the research into the former and present communities and occupations in Petersfield.

Initially inspired by the objects on display at the Cambridge Museum of Technology, from electrical engineering to the switch that turns on our kettle. This ubiquitous, yet often overlooked, everyday item conveys much about the people who used the items and the period in which it was created.

A switch label, as simple as it may sound, enables us to identify the correct switch to flick, switch, or turn. Introducing this element to the artwork enables machines or appliances to be showcased in colourful and graphic style. And at the same time, can identify and showcase a wide variety of components and instruments that have a relationship with the location of the new homes and their residents, past and present.

Tom’s designs for a series of inter-related artworks introduce a range of different styles of switches and levers that would have been used in and around the site throughout its history. ‘Steam Power’ is a piece referencing the site’s use in the 1850s. Under the partnership of Headly and Manning, The Eagle Foundry manufactured a wide variety of steam-powered machinery and engines including engine boilers, gasometers and pumps for use on the land or for fen drainage. ‘Train Signal Switch’ also references the Eagle Foundry, which occupied the central part of what was to become the council store yard. An OS Map from 1886 showing the land to the left between the foundry and rear gardens of Kingston Street Houses, and to the right between the foundry and the railway has been used to inform the artwork.

‘PYE Radio’ seating references the radios and TVs manufactured at the former, Cambridge based PYE factory, with many of these sets previously a feature of the homes surrounding the development and workers at the former factory local residents. 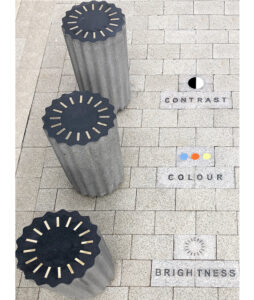 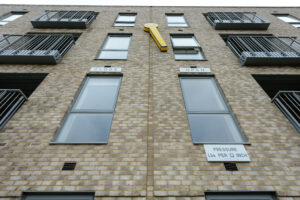