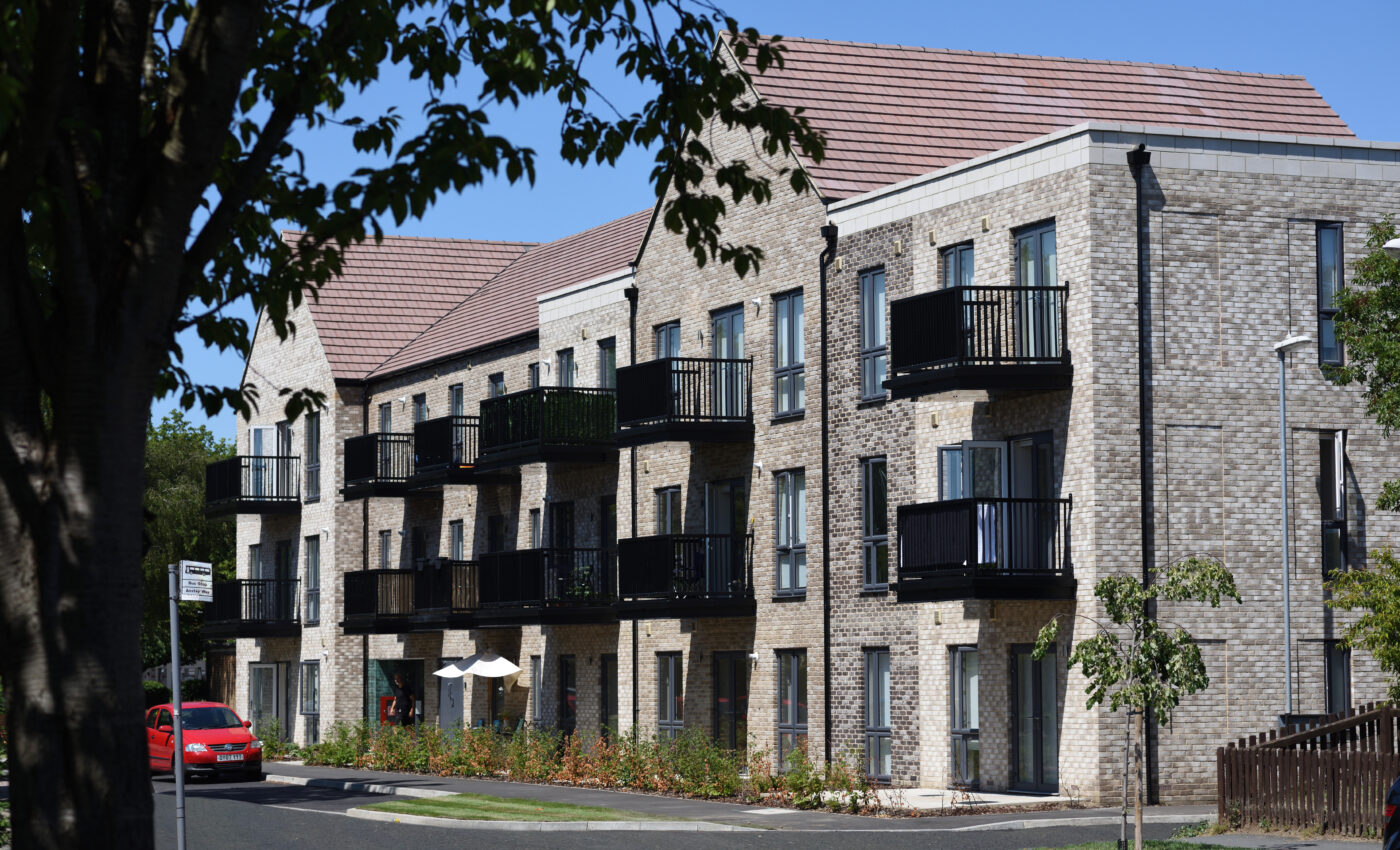 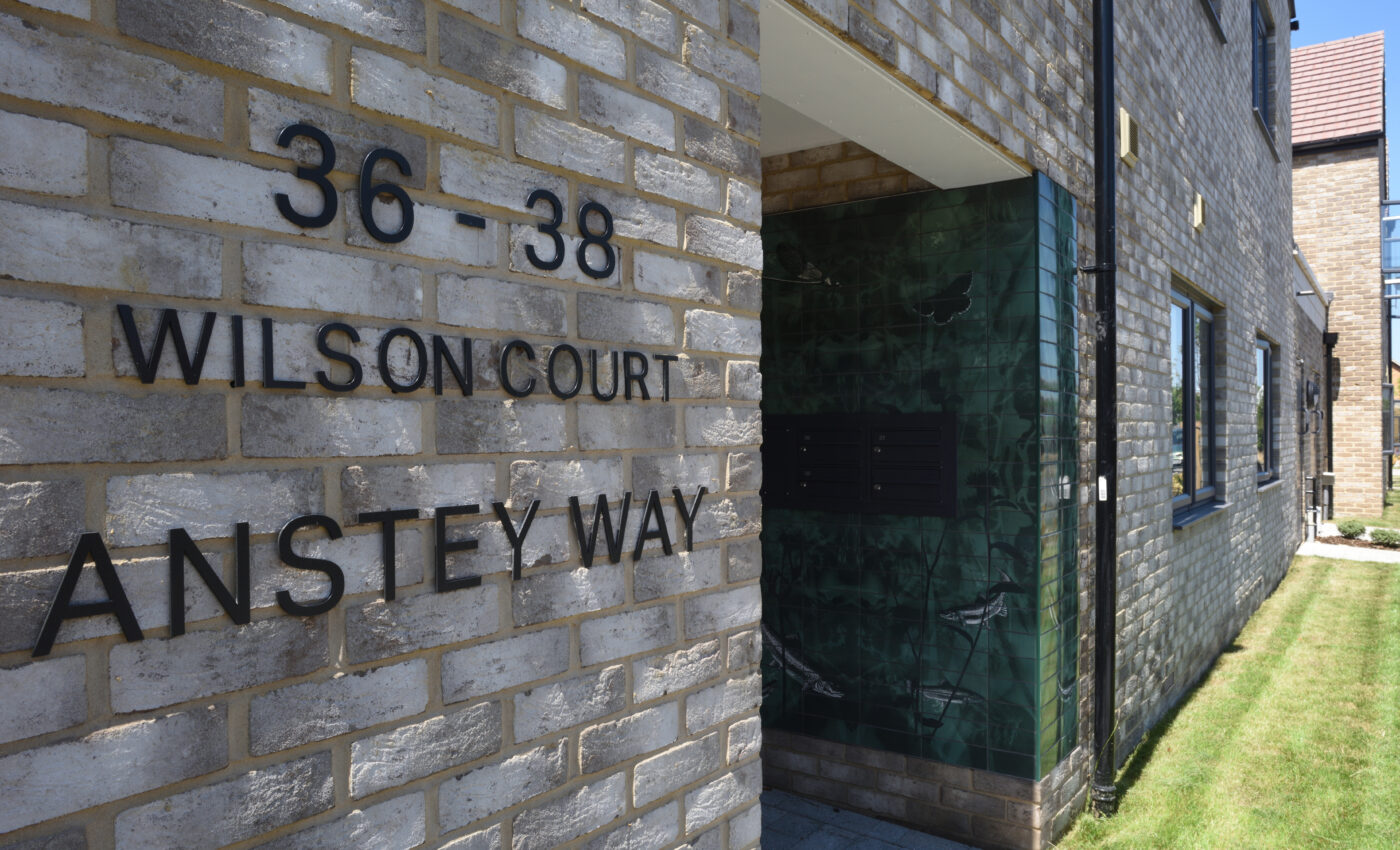 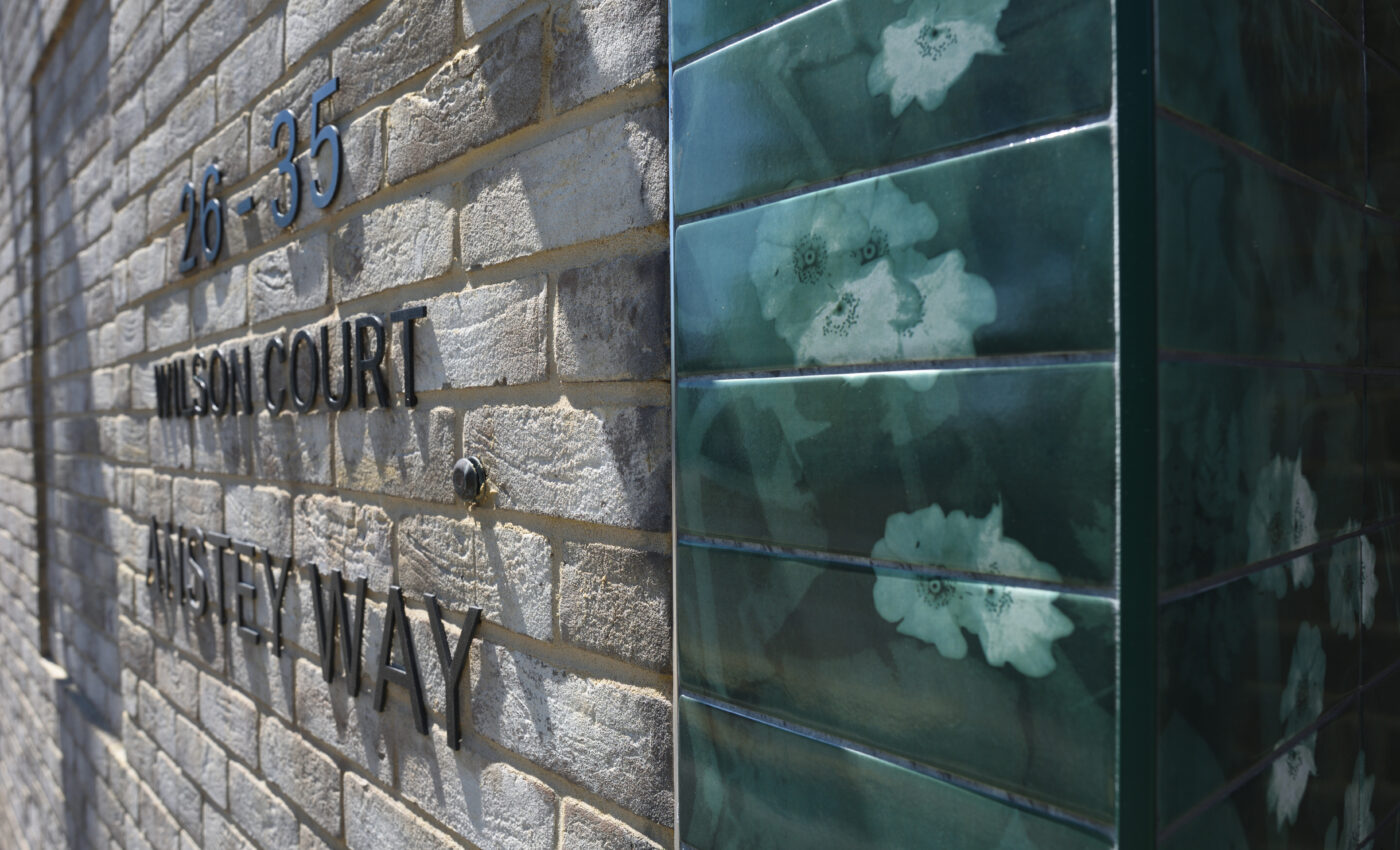 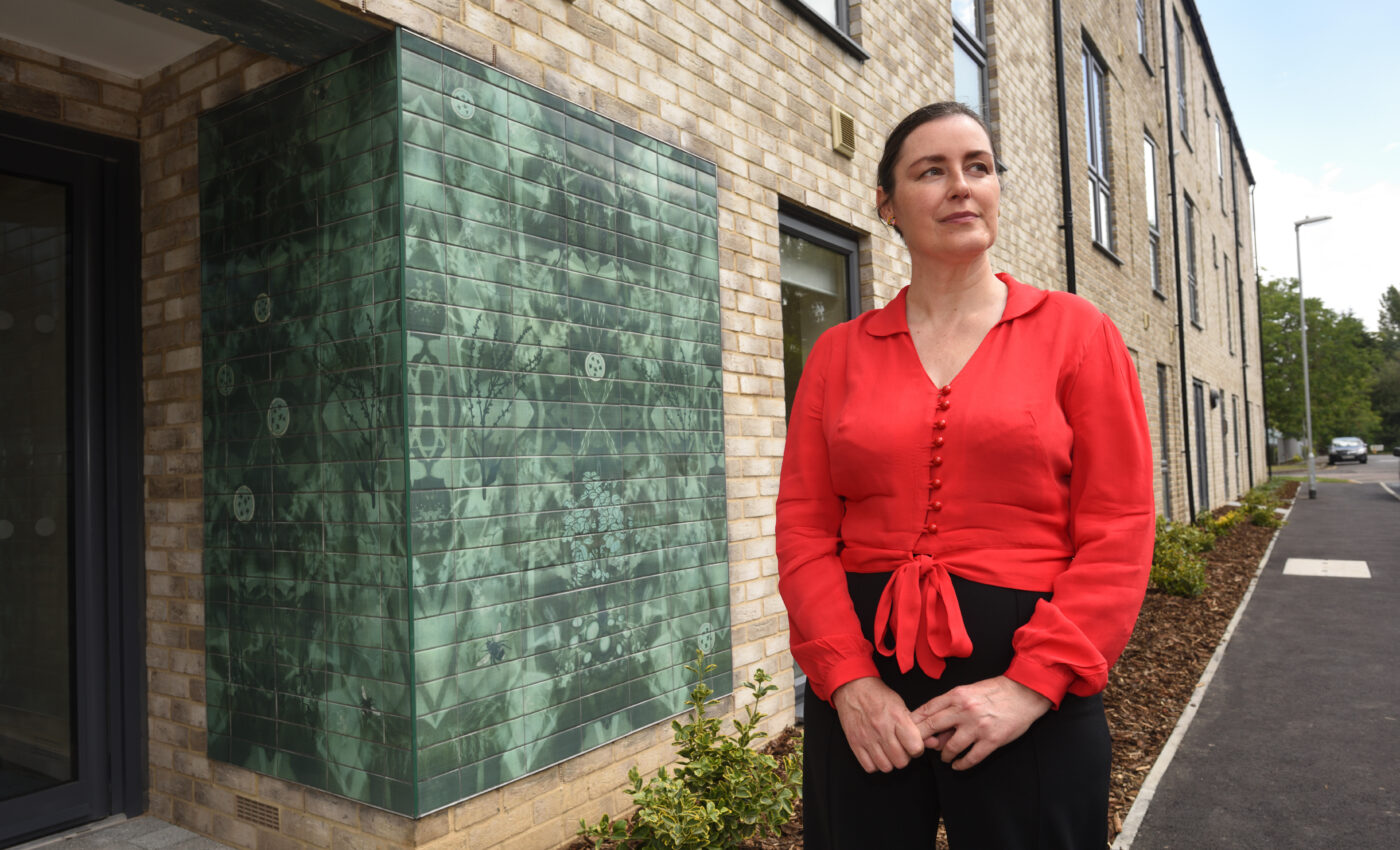 The artwork is being commissioned to enrich Anstey Way and enhance the public space provided through the scheme. Further details on the artists appointed to create works for the site are provided below. 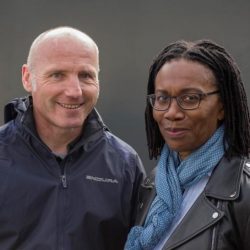 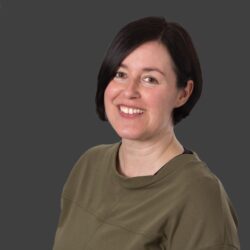 Installation of artwork by Sarah Sabin at Anstey Way 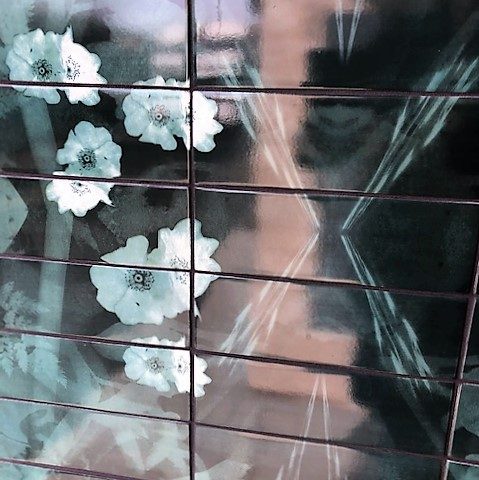 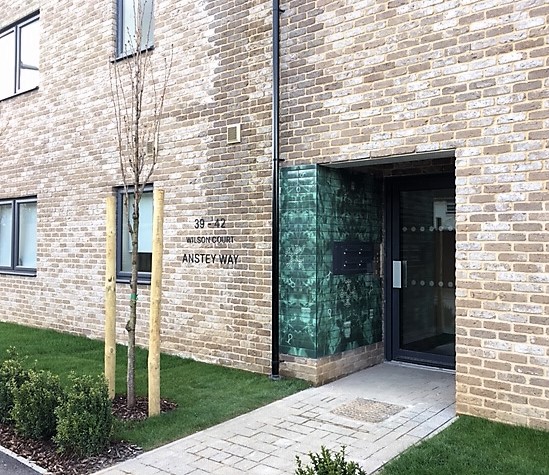 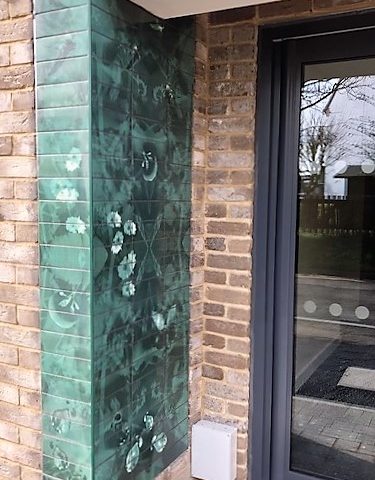 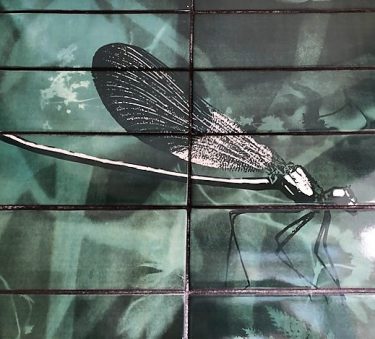 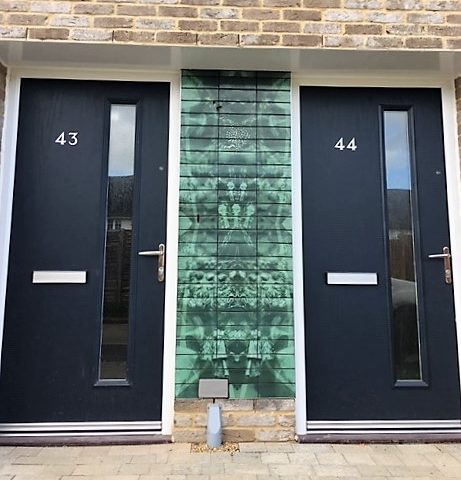 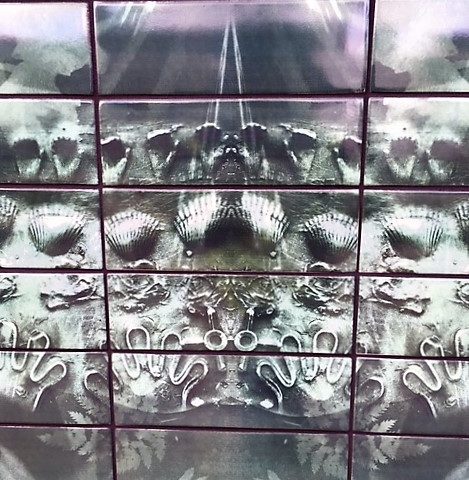 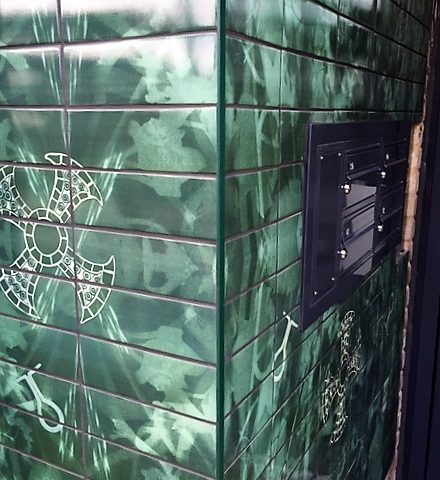 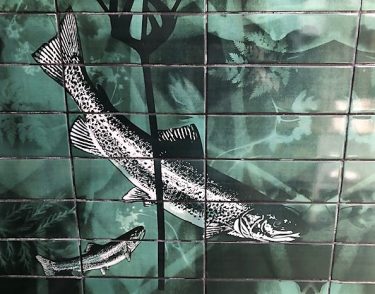 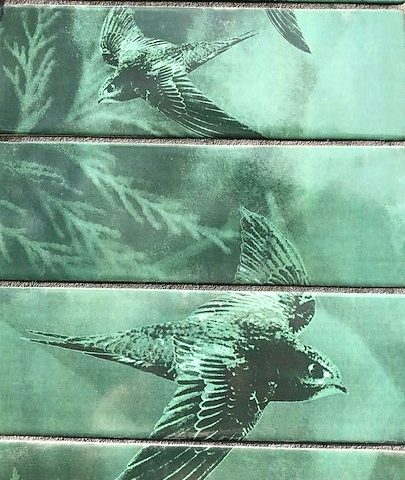 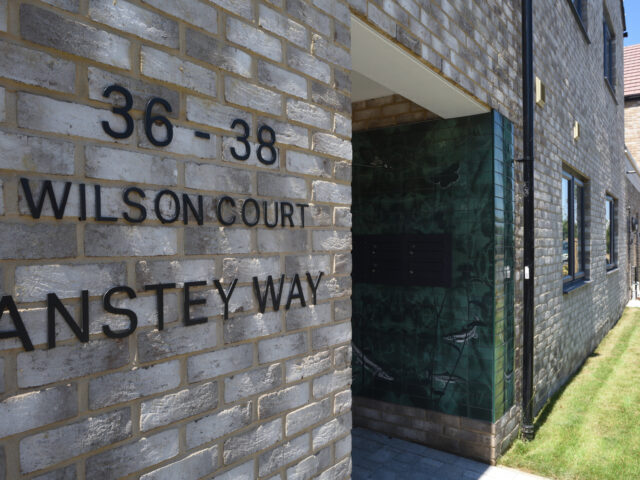 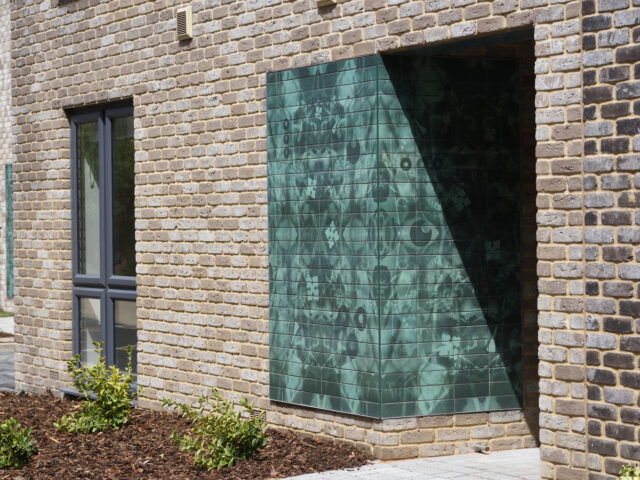 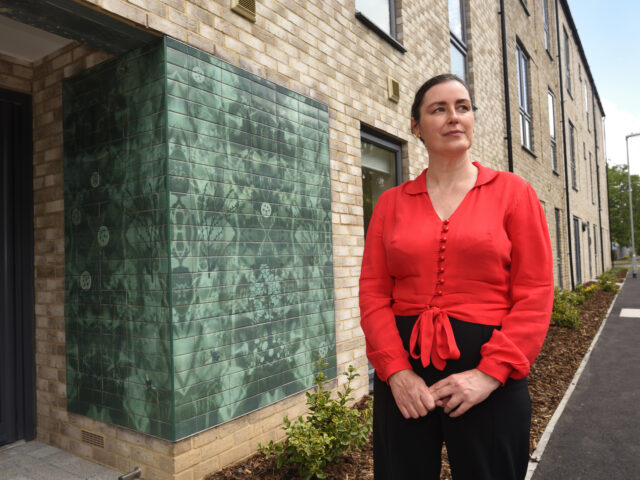 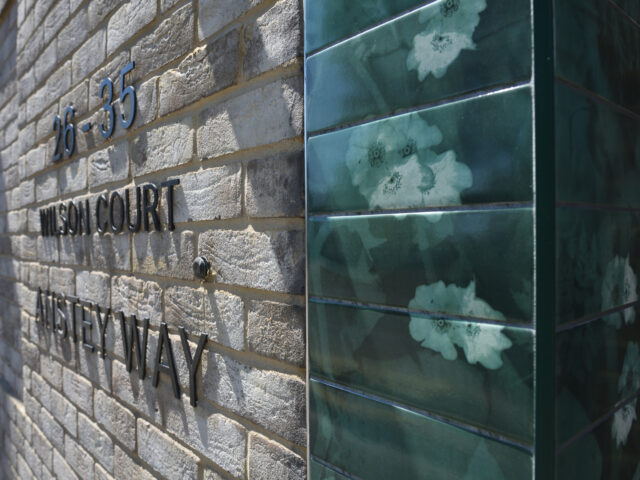 The artworks Sarah has produced for Anstey Way have been informed by the history of farming, the Plant Breeding Institute, and the ongoing horticulture in the community including the allotments and the community garden.

As it has grown, existing residents have welcomed newcomers into the community. Trumpington conveys a sense that it is a nurturing place. Sarah was keen to convey the idea of how a community grows and what underpins the communities that continue and flourish, her work exploring the connection between these characteristics or traits.

Sarah experimented with digitally manipulated imagery to produce a series of patterns, which were transferred onto the tiled entrances around the site. The design allows for individual elements to come into sharp focus and recede, according to the viewpoint of the onlooker.

The background image for the tiles has been created from digitally manipulated and layered cyanotypes (a photographic printing process that produces a cyan-blue print) created from plant life found locally. The background design has then been overlayed with further imagery to make eight distinct entrances.

Sarah wanted each entrance to have an individual identity. To create the themes, subjects and objects related to Trumpington have been overlaid onto the base design. If you look closely, you will discover:

Entrance B ‘Allotments’.
The focus of entrance B is the allotments. Tools, eggs, plant pots, bees and other objects can be found amongst the vegetation printed onto the tiles.

Entrance C ‘Community Orchard’
Within the design, Sarah has used various fruits and blossoms from the community orchard fruit trees along with images of swifts.

Entrance D ‘River & Nature’
The local nature reserve and river are featured through the fish, plant, bird and insect life that can be found.

Entrance E ‘Archaeology’
Some local archaeological discoveries, such as the cross, ceramic vessels and parts of a bed, have been scattered through the design.

Entrance F ‘School’
The pupils from Fawcett Primary School created plaster tablets using toys and various objects to depict the growing nature of their village, which were scanned and included in the design.

‘The Wilson Brothers’
Commemorates three local brothers who died in the First World War. Incorporated in the design are emblems from each of their regiments and cricket stumps. Robert, one of the brothers, being a well-known cricketer and member of the Trumpington Institute Cricket Club with a reputation as one of the best amateur bowlers in the county.

‘Plant Breeding Institute’
References the work that took place at the former plant breeding institute located in Trumpington. The institute developed crops such as the Maris Piper potato, alongside disease-resistant crops. 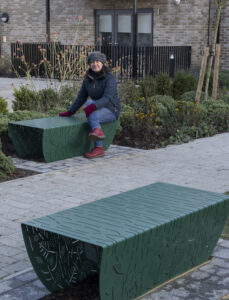 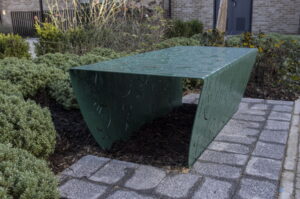 Alongside the bespoke tiled entranceways, Sarah has designed two unique benches for the garden area at Anstey Way. Carrying through the natural motif imagery of the Cyanotype prints, created with the local school children and used in the tiles, these forms are reflected in the stylised flowers and grass patterns on the benches. 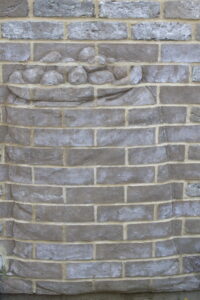 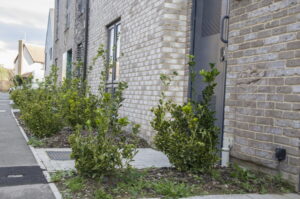 Incorporated into the brick wall is a sack of potatoes referencing the former Plant Breeding Institute and the introduction of the Maris Piper potato in 1966.

Sarah worked with and met various groups and individuals in the community, such as the Trumpington History Society, Residents Association, Allotment Society and year 3 pupils and staff at Fawcett School, to explore the ideas and collect research.

The children explored the themes of growing and community through, talking, exploring, and making in various ways. The workshops involved creating relief plaster tiles with found objects, cyanotypes or sun prints(an early photographic printing process) and creating handmade paper from shredding recycled paper. Pupils wrote words about their village, which they embedded in the paper.

Anstey Way consists of 56 homes within 11 apartment buildings comprising one; two and three-bedroom apartments. Of the 56 homes, 12 apartments are designated for over 55’s accommodation to replace those currently located on the site.